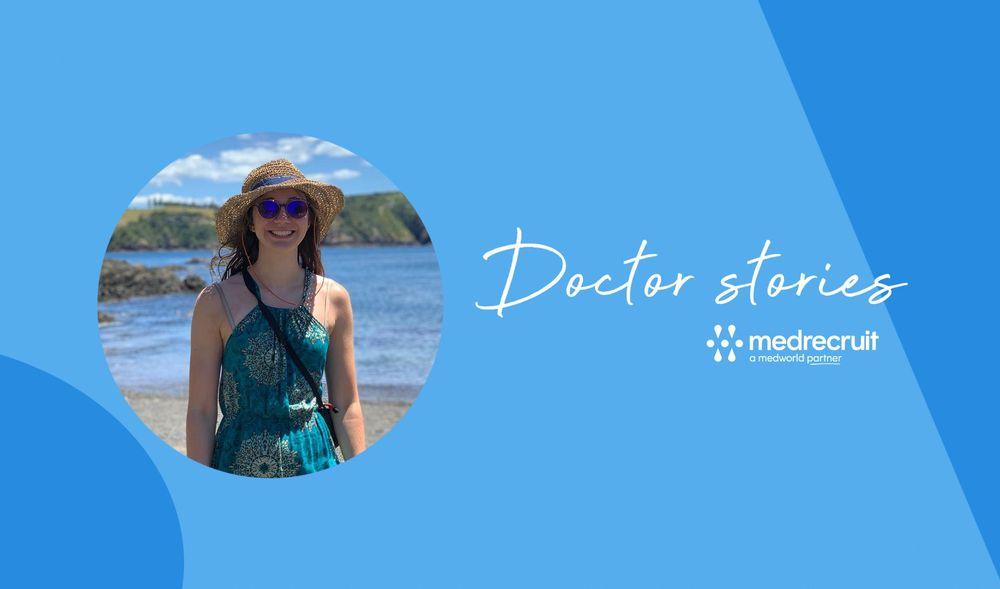 Originally from near Manchester (UK) Dr Canada went to medical school in Birmingham and worked in the NHS. She was used to large hospitals in big cities, but had always wanted to try living and working as a doctor in Australia or New Zealand.

“I’d heard of a lot of other doctors who’d done it and I’d hear the life out here is nice, and I wanted to experience life in another country,” she says.

Looking for work as a doctor in Australia and New Zealand

Dr Canada started to research what it might be like to move to Australia or New Zealand. She talked to doctor friends who’d done it, contacted lots of recruitment agencies and emailed some hospitals to get an idea of how it all worked.

She discovered Medrecruit and got chatting to Jess, a recruitment specialist in our International team. Dr Canada says it’s the rapport she had with Jess and the team that helped her choose Medrecruit.

“I found Jess really, really lovely. She’s so helpful. And [Medrecruit] were the ones that got me a job in paediatrics. That’s what I wanted – but ideally somewhere that isn’t too small.

“So now I have a job in paediatrics in Whangarei – which is small, compared to UK cities, but it’s not too small, it’s relatively big for New Zealand. It’s turned out really well and Jess was really helpful.

“I’m glad I went through an agency in the end, I think it would have been a lot more difficult to go direct.”

Getting help with the paperwork

Moving to another country to work as a doctor comes with a lot of paperwork requirements. Dr Canada says there was more paperwork than she expected, and arriving in August 2020 meant restrictions brought on by the Covid-19 pandemic added another layer of complexity.

“Medrecruit helped me with the paperwork. Rachel helped me with medical council registration and then they put me in contact with their immigration advisor, which was really useful – especially during Covid-19!”

Life and work in New Zealand

Whangarei is the northernmost city in New Zealand and the regional capital of Northland. It’s famed for its friendly, laid-back and beach-loving lifestyle and mild ‘winterless’ climate.

“Everyone is SO friendly here, I can’t get over it!” Says Dr Canada. “It’s hard to get around without a car here, but on my second day my registrar offered me his car to use for as long as I needed it. That was so nice. Everyone at the hospital is so friendly, but also generally across New Zealand.”

Dr Canada has spent her days off hiking, travelling the South Island or relaxing at her local beach that’s just minutes down the road.

“I’ve been to the beach every day. I see dolphins and whales most days, just casually, I’ve not booked a tour to see them, they’re just there. It’s incredible! The wildlife is amazing.”

Comparing working as a doctor in the UK to New Zealand

Dr Canada says her roster is still “pretty full on”. She sometimes works 10 or 12 days in a row, but the atmosphere is “a lot more chilled” than the big NHS hospitals she’s used to.

“I feel like it is a lot nicer working here because everyone is so helpful. It’s just a nicer environment to work in and it doesn’t feel like as much strain as the NHS.”

Junior doctors in New Zealand get a free meal while working and, though it’s a small gesture, Dr Canada (and other British doctors we’ve worked with) say it makes a big difference; “I tell my friends back home in the UK and they get really jealous. Just having a free meal whenever you’re on shift is so helpful. It also means that all the House Officers have lunch together, it’s so sociable.

“You feel so much more appreciated because of things like the free lunches. On Christmas Day, the hospital gave free Christmas lunch to all the staff at the hospital, which I thought was so nice. You wouldn’t get that at home.”

Dr Canada says one of the challenges of moving to New Zealand was the paperwork; there was more than she’d expected (and Covid-19 restrictions added to the list). But she says the effort was worth it; “I’m so grateful I’m here now, where there’s no Covid. I talk to my friends at home and they’re all in tier 4 lockdown…”

Her other tips for doctors are to not worry about meeting people (New Zealand really is a friendly country) and to be open-minded about the location:

“Don’t be afraid to move to smaller towns, especially in New Zealand. This is the smallest town and the smallest hospital I’ve ever worked in. But I’ve found it far more friendly than other hospitals I have worked in back home. You’ll have equally as good time working in a small town than if you went to Auckland or Wellington.

“And here, you can go to the beach all the time! Which would be harder in Auckland. There’s better weather and less traffic here.

“I feel like people miss out Northland because it’s that bit further, but they’re missing out. It’s so beautiful here and there’s so much to do. I was at the beach yesterday and I thought: I can’t believe that I’m living here!”